The following is a brief story I wrote about a gentleman I met during my lunch break. He was a homeless veteran, a truth that, unfortunately, is still a lingering one. With poverty levels in L.A. marked as one of the worst in the nation, homeless veterans are a sad and often overlooked truth muddled by the hustle and bustle of our glitzy town. This man, however, held a strong sense of pride intact. It was a brief moment that I spent with him, but I still remember him well.

Jack, this is for you. 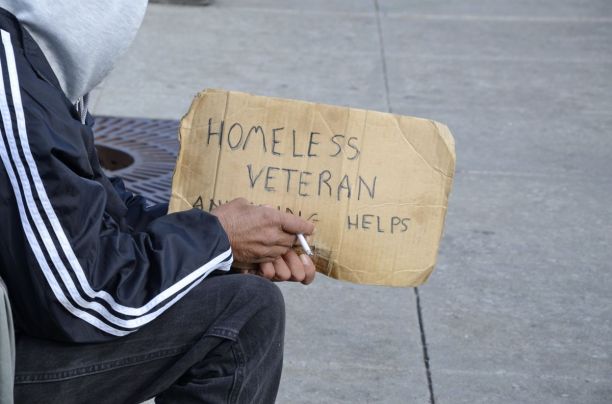 I met a man by the name of ..I can’t remember his name now…. at lunch today. At first, I approached him and sat with him as he slumped in and out of sleep.

His green Army baseball cap and Marines pin made him stand out from the regular crowd of people that frequented the strip mall. I knew he was homeless from his mobile home parked in front of Panda Express, a shopping cart filled with a hunters’ knife, a nearly empty pack of Newport’s, a blanket, and half a bottle of Tropicana Berry Blast. But his manner of dress was formal, almost gallant.

He had brown dress shoes, khaki slacks that were fastened by a belt, and a buttoned shirt.  His hair was unkempt, but effort was made to keep it from being too untamed.

His clothes spoke out, “I’m a respected man with a streak of misfortune, but I’ll get back on my feet.”

His slumping began to concern to me and I started to assume he was another addict looking for a fix.

Still, I wanted to sit there as a statement to the world, and to myself. I had assumed something of this man and I wanted to prove myself, and anyone who refused to sit next to him, wrong.

There is more to a person than their title and the money in their name, I thought to myself.

I watched him as I ate my Italian BMT, seeing his body slowly rock forward and readying myself to prop him back on his chair.

Eventually, he awoke from his intermittent slumber and politely asked me.

He replied, “I was looking at your shoes and it reminded me a lot of how I used to dress when I was your age.”

I remember his name now. His name is Jack. Jack Von der Bon.

Jack grew up in a simpler time: the late 40s. The Second war was a household subject and every citizen eventually and dutifully fulfilled their call to arms without protest. Dentists, surgeons, and fresh graduates alike would stand side by side on the beaches of Normandy. There were no open protests of the war of the likes of the 70s just yet. For in this war, there was a clear and definite objective: stop Hitler and his Axis of Evil.

Jack’s parents were both famous German fighter pilots. His mother was a dogfighter who had brought down 8 B52’s. His father, whose name was also Jack, was also a fighter pilot. Their skills had made them decorated soldiers in the German army. And it was this repertoire that allowed them to defect to the United States when the war began to run its last years.

Coincidentally, his son would follow in their footsteps in the jungles of Southeast Asia, during the Vietnam conflict. His role was to be a shadow. Surviving for months on end in the jungle, making his kills hidden behind the foliage of bushes and trees. He never knew who his victims were.

He called it the governments’ failsafe.

It would never get back to them because his assignments were in the form of photographs and coordinates. He didn’t mention how long he was a CIA-backed sniper, but I didn’t see in his eyes that empty void I’ve seen from real hit men. That inhuman, almost beastly stare. I’d assume it was because of the distance you put yourself between yourself and your target, both physically and mentally.

“When they’re in the distance, it’s easier to see your victims than as people. Dehumanizing the Vietnamese, one of the many ways the Army fought in the war.”

But that was behind him now, Jack reaffirmed as he ended his war stories. He was living in a strip mall in Los Angeles, making due with whatever he can find.

In a sense, he was in his own jungle now, living off the land, salvaging and surviving.

What struck me the most about him  was that he never once asked for a handout.

I was left impressed…Not that I meant to talk to him to be impressed. I always wondered what someone might be feeling when having to ask for money, and having to take in the grimaces of disgust and sympathy from others…and that’s if they even make eye contact.

Does charity rob you for your dignity as a person, like pinning a scarlet ‘H’ on your chest?  That may just be my pride talking, but I don’t think I could be so dependent on the charitable whims of others looking to spin their karmic circle in their favor.

But I’d rather see a proclivity to help than apathy.

Thank you for your service, Jack.

To find out how to help Homeless Veterans, I encourage you to visit the link below.

(Author’s Note: Some names and places were changed for the sake of privacy)